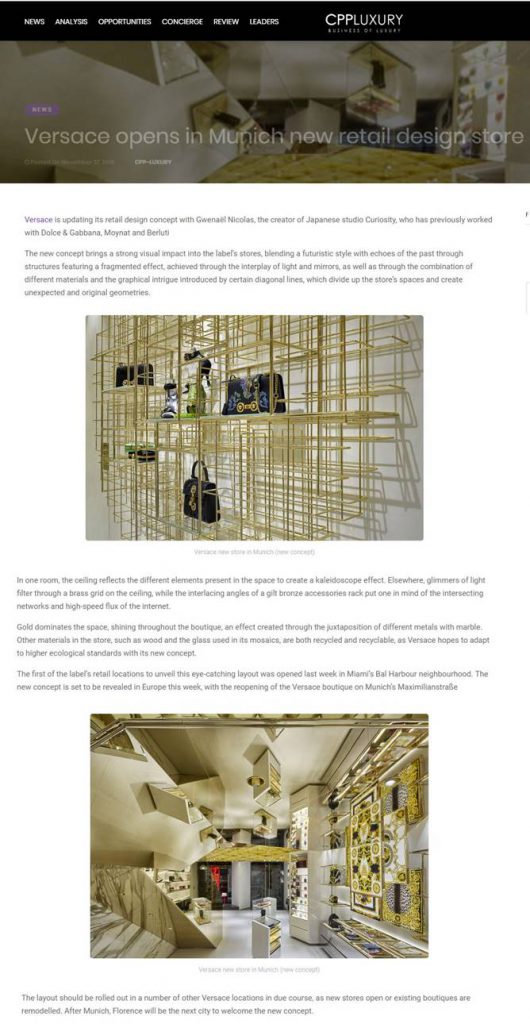 Versace is updating its retail design concept with Gwenaël Nicolas, the creator of Japanese studio Curiosity, who has previously worked with Dolce & Gabbana, Moynat and Berluti

The new concept brings a strong visual impact into the label’s stores, blending a futuristic style with echoes of the past through structures featuring a fragmented effect, achieved through the interplay of light and mirrors, as well as through the combination of different materials and the graphical intrigue introduced by certain diagonal lines, which divide up the store’s spaces and create unexpected and original geometries.

In one room, the ceiling reflects the different elements present in the space to create a kaleidoscope effect. Elsewhere, glimmers of light filter through a brass grid on the ceiling, while the interlacing angles of a gilt bronze accessories rack put one in mind of the intersecting networks and high-speed flux of the internet.

Gold dominates the space, shining throughout the boutique, an effect created through the juxtaposition of different metals with marble. Other materials in the store, such as wood and the glass used in its mosaics, are both recycled and recyclable, as Versace hopes to adapt to higher ecological standards with its new concept.

The first of the label’s retail locations to unveil this eye-catching layout was opened last week in Miami’s Bal Harbour neighbourhood. The new concept is set to be revealed in Europe this week, with the reopening of the Versace boutique on Munich’s Maximilianstraße

The layout should be rolled out in a number of other Versace locations in due course, as new stores open or existing boutiques are remodelled. After Munich, Florence will be the next city to welcome the new concept.