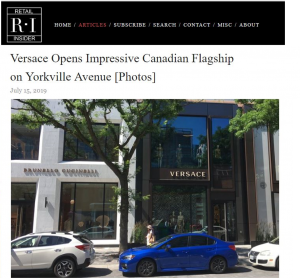 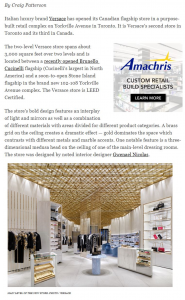 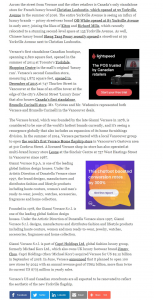 Italian luxury brand Versace has opened its Canadian flagship store in a purpose-built retail complex on Yorkville Avenue in Toronto. It is Versace’s second store in Toronto and its third in Canada. The two-level Versace store spans about 3,000 square feet over two levels and is located between a recently opened Brunello Cucinelli flagship (Cucinelli’s largest in North America) and a soon-to-open Stone Island flagship in the brand new 102-108 Yorkville Avenue complex. The Versace store is LEED Certified.

The store’s bold design features an interplay of light and mirrors as well as a combination of different materials with areas divided for different product categories. A brass grid on the ceiling creates a dramatic effect — gold dominates the space which contrasts with different metals and marble accents. One notable feature is a three-dimensional medusa head on the ceiling of one of the main-level dressing rooms. The store was designed by noted interior designer Gwenael Nicolas.

David Wedemire and Stan Vyriotes of DWSV Remax Ultimate Realty Inc. represented Versace in the lease deal with landlord First Capital Realty. First Capital Realty is developing the fully-leased 102-108 Yorkville Avenue block, which will also feature a location for chic entertainment concept Her Majesty’s Pleasure on its top level. A high-end Japanese restaurant will also soon be announced for the lower level. Across a pedestrian laneway from the complex is luxury brand Chanel, which opened its store at 98 Yorkville Avenue in November of 2017 featuring a heritage facade that was once part of the Mount Sinai Hospital (First Capital Realty also owns that building, as well as several neighbouring properties including a recently shuttered space for Diesel).

Versace’s first standalone Canadian boutique, spanning 2,820 square feet, opened in the summer of 2014 at Toronto’s Yorkdale Shopping Centre in the mall’s original ‘luxury run’. Versace’s second Canadian store, measuring 1,875 square feet, opened in December of 2015 at 747 Thurlow Street in Vancouver at the base of an office tower at the edge of the city’s Alberni Street ‘Luxury Zone’ that also houses Canada’s first standalone Brunello Cucinelli store. Mr. Vyriotes and Mr. Wedemire represented both Versace and Brunello Cucinelli in the Vancouver deals.

The Versace brand, which was founded by the late Gianni Versace in 1978, is considered to be one of the world’s hottest brands currently, and it’s seeing a resurgence globally that also includes an expansion of its home furnishings division. In the summer of 2014, Versace partnered with a local Vancouver group to open the world’s first Versace Home flagship store in Vancouver’s Gastown area at 310 Cordova Street. A licensed Versace shop-in-store has also operated at multi-brand luxury store Leone at the Sinclair Centre at 757 West Hastings Street in Vancouver since 1987.

Gianni Versace S.p.A. is one of the leading global fashion design houses. Under the Artistic Direction of Donatella Versace since 1997, the brand designs, manufactures and distributes fashion and lifestyle products including haute couture, women’s and men’s ready-to-wear, jewelry, watches, accessories, fragrances and home collection.

Founded in 1978, the Gianni Versace S.r.l. is one of the leading global fashion design houses. Under the Artistic Direction of Donatella Versace since 1997, Gianni Versace S.r.l. designs, manufactures and distributes fashion and lifestyle products including haute couture, women and men ready-to-wear, jewelry, watches, accessories, fragrances and home collection.

Gianni Versace S.r.l. is part of Capri Holdings Ltd. global fashion luxury group, formerly Michael Kors Ltd., which also owns UK luxury footwear brand Jimmy Choo. Capri Holdings (then ‘Michael Kors’) acquired Versace for US $2.12 billion in September of 2018. In June, Versace announced that it planned to open 100 new stores by 2022 with an annual revenue goal of US$2 billion, more than twice its current US $775 million in yearly sales. Versace’s US and Canadian storefronts are all expected to be renovated to reflect the aesthetic of the new Yorkville flagship.